Three Weeks Down, Many to Go.

Well, it was a pretty good week this week.  Lots of work done.

Eli was into everything as always and I caught him in the act.  Here he is searching in the kitchen cupboards for something to eat. 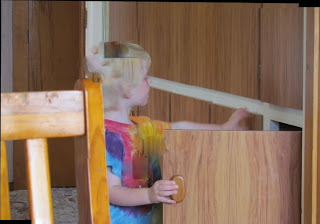 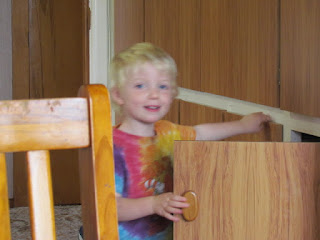 Well, Shakayla is finally getting back into the swing of things.  It has taken awhile but she has worked quite diligently when she has been working.  She is ditching off when she finds something else much more exciting to do, but that is what we're going to be working on during Unit 30.

She began reading The Shakespeare Stealer for her extention history, after finishing Who was Marco Polo?  For history, she has been continuing with Child's History of the World along with Hero Tales.  We began The Wonderful Winter on Thursday for her storytime.  For independent history, she is reading Shakespeare and the Globe.

She did some research on the spice trade last week.  One part of it was to map out the Spice Trade and she chose to do it on the computer. 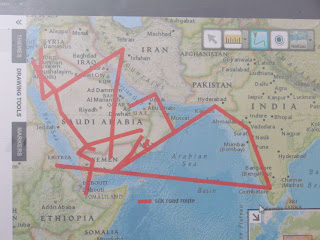 She has been reading Who was Leonardo DaVinci? for science.  She did a science experiment to demonstrate how the sun rises in the east. 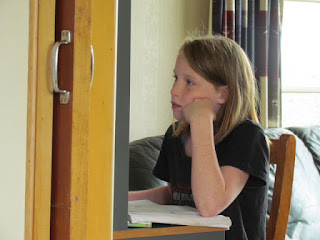 Shakayla doing her research.  Very intent on what she was reading.

The highlight of her week was making her spice chart.  It provided quite a bit of entertainment, as all the children were up the table trying the different spices. 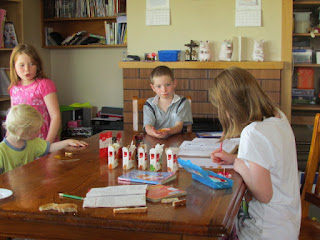 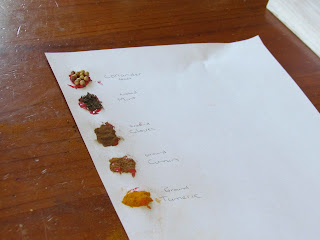 This was taken about halfway through the finished chart.  We had children running around like mad things when they tried ginger.  Certainly had me in fits of laughter.

Beth had a fabulous week.  She really worked hard and showed plenty of endurance.  We didn't manage to do her art project, but are hoping once I get the right supplies we can do it.

We read some more about Daniel Boone and Quicksilver Bob.  She did a fantastic job on her notebooking page and her timeline, so much so that I took photos of them. 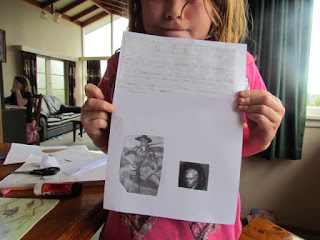 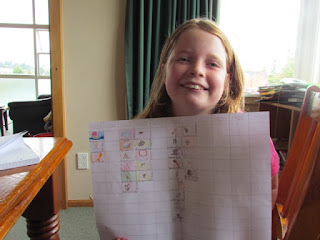 She is putting a lot more effort into her presentation which is just tremendous.  Her math is humming along as is her cursive.  We have been reading more Encyclopaedia Brown which challenges us to think about the clues and help figure out each case.

For science we have still been looking at the creatures in the woods.  She had to do an experiment of getting a piece of fruit to go moldy which gave her the shivers every time she looked at it.

She has been learning 'Our Fathers World' as her current hymn to learn which has been tremendous.

Beth's favourite part of the week was her Science notebooking page.  She took extra special care and did a fabulous job. 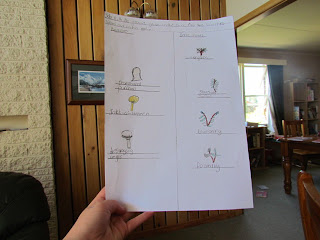 James had a great week.  His reading is really coming along.  We did take him to the optometrist and so he has new specs to pick up tomorrow, which hopefully will make the reading just a little easier too.

He finally has mastered the written words for 1 - 20, so we are now able to move on in his math.

For his history, we read about St Augustine, Charles the Great and Albert the Great.  He really enjoyed these stories and I know he now has the pegs in place to hang further information as he gets older.

He has been doing a bit of opposites work.  I hadn't realised he didn't actually know what opposite meant.  Now that we've done a few exercises he is definately getting the hang of it. 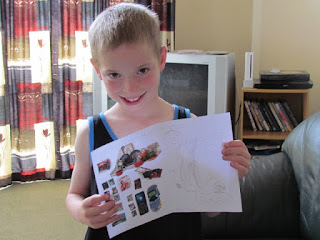 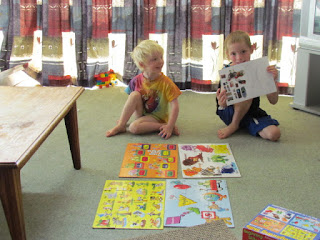 James made a poster related to the story about Charles the Great.  He spent a great deal of time and effort doing it.  Here he is showing it off, and then sharing the limelight with Eli who had just finished his four puzzles all on his own.

Anyway, another fabulous week with Heart of Dakota.  It brings such rich learning into our home.
Posted by Molly at 01:44

Molly
I am a Daughter of the King, a wife of an amazing man, a mother of four precious ones. I am blessed beyond all measure.