Well, it's been a busy couple of weeks.  We have been fairly busy with our day to day things with extra curriculars added in and our first homeschool group of the year, not to mention a birthday party thrown in, and harvest on the farm happening whenever it can.

I thought I would just pop in a bit of Beth's cursive work she is doing.  Her handwriting is really coming along this year, considerably tidier than last year.  She has also found she really loves doing cursive so much so that some days she does it in her free time. 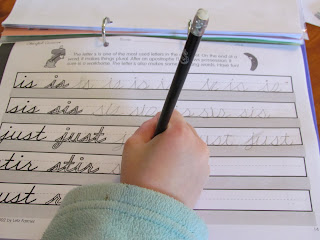 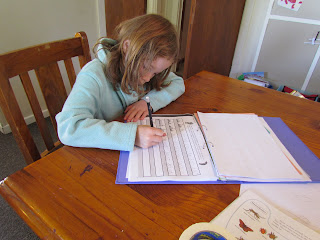 During Unit 4, the girls were learning about the Climate Changes, so we finished reading Life in the Great Ice Age.  Quite a fascinating book to read.  Very interesting to see a viewpoint of people who lived in caves in the Northern Hemisphere.

Here the girls are working on their project of making a model of the map of that era.  They made it with air dry clay which they managed to keep pliable after the project finished and are now slowly making small things from it and drying them.  I thought it was very wise of them to use it twice.

We began reading A Child's History of the World this week, and began talking about the different cultures, languages and foods that were in the world then, and also in the world today.

Our poem of the week was "To Any Great Reader" by Robert Louis Stevenson.  The girls did some creative writing and retold the poem in their own words.

They also finished memorising the rest of Psalm 1.  It really was a joy to have discussions with them about this psalm.  It not only taught them something, but I too learned quite a bit.

For their science project this week, they made a cactus each out of playdough and used toothpicks as spines.  They had to work out how the spines help to keep the cactus cool.

This turned out to be a bit of an interesting week.  It was a week learning about the Egyptian Civilizations.  The week started out on a bit of a sad note as I and a couple of the blossoms had headcolds.  So we started off slower than usual.  Partway through day 2 of the week, things went from bad to worse.  It was then I realised I really needed to slow Beth down so that she would learn completely and not be dragged along with Shakayla, so she is now going at half pace, so has only finished half of week 5.  So from here on in, I will be blogging for Shakayla and Bethany seperately.

Anyway, it was a great week of learning.  Shakayla learnt a great deal about the Egyptian Civilizations.  Together the girls learnt about hieroglyphics and the project of the week involved making a cartouche of the lady Pharoah Hatshepsut's name.

All in all, she had a great week and is really enjoying working a little more independently now.
Posted by Molly at 20:01

Molly
I am a Daughter of the King, a wife of an amazing man, a mother of four precious ones. I am blessed beyond all measure.